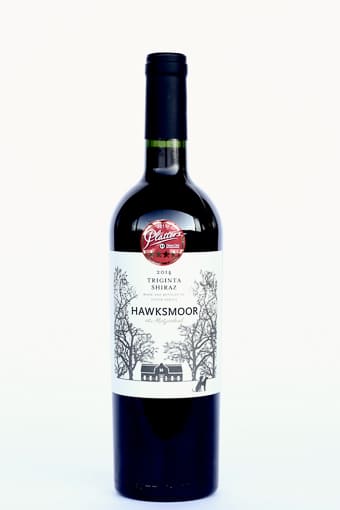 (SOLD OUT, new vintage to be bottled and labelled in a few weeks)

We uniquely oak our Shiraz under a “limited release” wine for thirty months. See “further notes” below, to find out why! In this instance we have not chosen a “Hawksmoor” related name, but instead, focused on the oaking. “Triginta” is the Latin word for “thirty”.

Shiraz- 100%.  Our “terroir” suits this variety well. We make it as a single varietal, and also use it in our two signature “Rhone” style blends: Saint Alfege’s and Algernon Stitch.

14 % alcohol by volume. As above, gently oaked in mature barrels but for thirty months. Limited release, only two barrels made.

“Shows bright red fruit, the tannins (are) savoury (and) harmonious.”

Our first “ Triginta” was from our 2011 vintage. AS with many successes in life, it was a pleasant, unplanned  mistake. We had forgotten about a couple of barrels in a dark corner of the cellar. We had not “topped up” the barrels – so there was a risk that the evaporation had  allowed too much air to form at the top of the barrel, which would lead to oxidization. The wine maker was nervous and sceptical . However, because of the coolness and darkness of the cellar, and because we had not opened the barrels at all for taking samples  (or topping up) the wine was lovely. It was very popular and sold well. Being both an independent vineyard, and also vineyard focusing on specialist, “small run” production, we are able to take the time to just work on one or two barrels for release as a single cultivar wine. We therefore mimicked this process, hence “Triginta 2014”

Our Shiraz vines are now 19 years old. We have some 5,85 hectares and use this variety both as a single cultivar wine and as a blending wine. Generally with oaking.