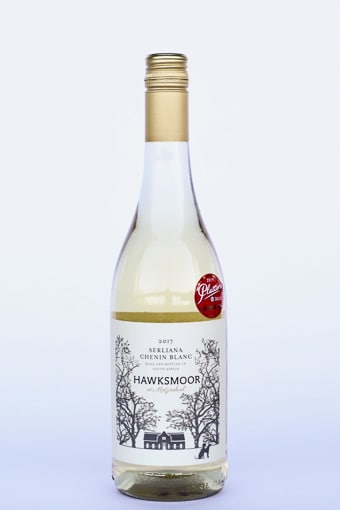 Chenin Blanc – 100%..  On the farm we have two blocks of chenin, both 36 years old by the time of this vintage. These, therefore, are particularly mature vines and are in high demand because of their richness of flavour, albeit the age of the vines means that we yield a lower than average ton per hectare. One block is “trellis” style. (Should you visit the farm, this is the block on your left hand side, near the entrance gate to the werf) The second block comprises “bush vines” – giving a particularly low yield, but conversely a high intensity of flavour. For our “Serliana” Chenin we generally make a half/half blend of the trellis and bush vines.

A classic French variety from the Loire area of France, best known in France as the wine named “Vourvray” or “Saumur”, which is often sparkling, also known locally as “steen”.  Records as far back as 1655 show Jan Van Riebeeck,  introducing Chenin Blanc.( A founder of the Dutch Cape Colony of the Dutch East India Company.)

This wine Becomes “creamier” the longer you leave it in the glass… very much an “easy drinking” wine- Interesting to compare alongside it’s more complex cousin – Edward Goodge, see below. Every wine has “it’s time in the sun” In the 1990 Chardonnay was “all the rage” – now we are familiar with the anecdote amongst white wine drinkers “ABC” – “Anything But Chardonnay” , a cruel comment, since there are some exceptional chardonnay’s out there. It is all down to personal taste. Likewise, more recently Sauvignon Blanc has been a firm favourite, but many recent vintages have been regarded as to be too “rich” in flavour and too distinctive to suit all tastes. Chenin Blanc is proving to be the variety that can be served and will suit the majority, so if holding a party, or at a restaurant table with a group of friends, you will probably find it is the variety that will be the most likely to please all.